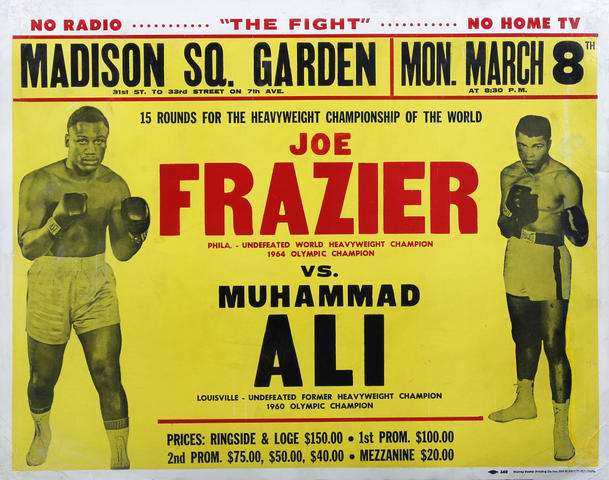 The natural light had faded on the grand ole city. The line of limosines were stretched for three blocks almost reaching 8th Avenue. It was still three hours before the bell would sound to begin the most anticipated war of the 20th Century. Frank Sinatra, commissioned by ‘Life’ magazine to take pictures, stepped out of is ride in front of Penn Station with a camera draped over his neck. Walt “Clyde” Frazier, having just led the Knickerbockers to a World Championship a year earlier, could be seen leaving his Manhattan pad at The New Yorker Hotel beginning his short walk over to Madison Garden. Diane Ross, President Nixon, and astronaut Buzz Aldrin were more discrete slithering through side entrances to get securely inside the world’s most famous mecca. The constant current of the energy felt in midtown was exaggerated. There was an electric storm brewing in the front of Pennsylvania Plaza. It was March 8, 1971, a lifetime ago, two of the greatest heavyweight boxers ever to put gloves on were just hours away from settling a score that transcended a common sporting event. Muhammad Ali, the graceful light-footed carnival barker out of Louisville, Kentucky, was trying to get back his heavyweight boxing crown. It was a title that had been stripped from him stemming from his opposition to the Vietnam War. In the other corner was Smokin’ Joe Frazier, the brawler from the hard streets of Philadelphia determined to stop his foil on this earth from taking his belt.

A few minutes before 10:00 pm, in red shorts with white trim , 29 year Muhammad Ali emerged from a tunnel on the west side of The Garden. His gloves were raised in the air as he was serenaded to chants of “Ali, Ali, Ali!!” A figure emerged from an east end tunnel dressed in lime green with gold trim trunks. It was the reigning Heavyweight Champion of the world Joe Frazier. Two great warriors, two legends of our time were now about to be pitted against each other in arguably the biggest battle between two men since Cain and Abel. Going into the bout both men were undefeated and had never been knocked to the canvas. Muhammad Ali, born Cassius Clay, knocked out Sonny Listen in 1964 to become the undisputed Heavy Weight Champion of the world. In 1967 Ali was convicted of dodging the draft. His title was taken away without a glove being laid on him.  Frazier became champ in 1970 and was the man that was blocking Ali’s quest to get back what had been ripped from him. At the time of the fight the public was divided approximately 50-50 on who they wanted to prevail. Frazier was seen as the establishment’s champion. Joe Frazier was a man standing for the American flag, Christianity, and President Richard Nixon. Ali was known as the “Man of the People” to all that fell in love with his mystique. To his distractors Ali was a radical American Muslim who had betrayed his country by refusing to fight in Southeast Asia.

Although the two had a mutual respect for each other prior to their first fight being scheduled (Frazier helped Ali financially during the former champ’s exile from the ring) the media circus that was built leading up to fight would cause scars for both men that had nothing to do with physical punches being exchanged. Ali was the classic showman, talking in rhymes and insults that Frazier believed hit below the belt.

“Frazier ain’t nothing but a “Uncle Tom, he ain’t black, he just does a dance for the white man.” Smokin’ Joe in turn refused to call Ali by his Muslim name. Instead Frazier called him “Cassius Clay, the traitor to America.” By the time the fight came around the two combatants developed a personal hatred for each other that was very real. When you look at highlights of the fight it is apparent each fighter went into the ring with the intent of maming the other. “I’m prepared to leave my life in that ring,” Frazier said in the days prior to fight.

“I am going to whoop that ugly Gorilla Joe Frazier so bad he will be begging for his life. The man stole the title that is rightfully mine, it’s time for him to be punished for his crime.”  It was hard to tell how much of the rhetoric was part of the show and how much of the insults were pure animosity between two men who both felt they were the true champion of the people. Because of the circumstances of the time in American history and the contrast of personalities between the two men the fight was billed as the “The Fight of the Century”. To this day I cannot think of an event that lived up to the massive hype the way Frazier/Ali I did. Two heavyweights fighting for principles, fighting for their large armies of supporters, and fighting for their own lives.

There wasn’t one student in my fifth grade class who didn’t pick a side in this classic bout.

My best friend, Kevin Kenyon , and my teacher Ms. Meng were big Ali fans. I was a Frazier man. My parents were conservatives who didn’t find Ali’s act amusing. They were Nixon Republicans who supported the war in Vietnam and looked at Ali as an unpatriotic draft dodger. At age 11 I wasn’t ready to embrace a contrarian and maverick such as Ali. Joe Frazier seemed like a hard working honest guy who had been unmercifully insulted by is old friend and commrade. Ali, in my opinion had gone over the line with the lack of respect he showed Frazier. In my little world of the “Campus School” in New Paltz New York Ali carried more support than Frazier. Ali was the voice of the anti-establishment. If you were against the Vietnam war and Richard Nixon you were probably a fan of Ali.

Frazier was the lunch bucket  boxer with a low center of gravity who never stopped pursuing his opponent inside the ring. He was a fierce puncher who stalked his prey unrelentlessly inside the ropes. Going into the bout Frazier was 26-0 with 23 TKO’s. Ali was tall and handsome as heavyweight boxers go. He appeared the opposite of Frazier as he glided around the boxing canvas like a tadpole skipping on a pond. His lightness hid the power and speed of the man. As much as I rooted for Frazier I couldn’t help notice the magical foot movements, quick hands, and rhythmic glide. He was an original and there will never be another Muhammad Ali.

My bedtime on school nights in 1971 was 9:00pm. The fight was on a Monday with a scheduled 10:00pm start. By the time the ring announcers introduced the fighters it was closer to 10:30pm. There was no television coverage with the exception of closed circuit pay per view. Under my bed covers with my Met game transistor radio I was able to find a feed that provided round by round updates. On rare occasions events with super high expectations actually exceed them. Through 14 rounds the judges had the fight very close, giving Frazier a very slight advantage.

This is all I knew as I laid in my bed waiting for the results of the final round. “Frazier connected with a left hook straight out of south Philly to begin the 15th round that put Ali onto the mat,” the radio announcer declared. Ali’s trainer Angelo Dundee would later say Ali tripped and easily bounced back up. Nonetheless the knock down propelled Smokin’ Joe to a unanimous decision and he retained his title in what  would be described by most of the boxing community as the greatest fight of all time. It turned out both men would never fully recover from the beatings they imposed on each other that March night. They would go on to fight each other two more times, Ali won both. The rematch returned to Madison Square Garden in 1974 and the finale was the “Thriller in Manilla” in 1975.

The two men left their entire beings inside the ropes in the those three bouts. But it is the night of March 8th, 50 years ago tonight that will continue to hold a special place in history. A night when hype and unfettered anticipation of an event met all of our expectations, and more. Two great champions in the greatest arena in the world trying to destroy the other. Two men from similar backgrounds believing in their own way they were fighting for principle, even justice. It was years later that I  watched the fight in its entirety. What I saw was two proud warriors leaving every ounce of energy they had on the New York canvas. In proper perspective it is fair to conclude that both men died early deaths because of what they left behind on the ropes at the garden that night. In the days after the fight the pictures in the tabloids and Sports Illustrated told the story of the two champions future. Both men looked like they had through hell and back. There was no way they would ever be the same. It was evident this was a climax in a sense, they had given this war too much. They both entered that ring prepared to trade death for victory. Their sacrifices may have been lost on themselves but the memories that they left for history will not soon be forgotten. They were the gladiators of our lifetime and we all know that our heroes primes are fleeting.