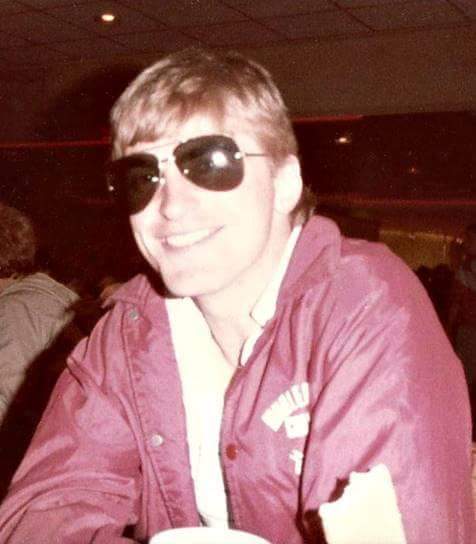 There was a soft quiet to the Mid-September night. It was time to say goodbye to the summer. No matter how much you understand nothing lasts forever, waving so long to the sweet summertime is a painful. The boats were coming off the Hudson River and into the Rondout Harbor as the sun was setting on both the evening and the summer. The Captains of the river had that serious look of being near the finish line of another season. It has taken me a long time to understand that my appreciation for the 90 day interval from June 21st to September 20th has much to do with my childhood . It also has to do with being brought up by school teachers and becoming one myself. Leaning back in my seat, with a Glenlivet neat sitting in front of me, staring blankly at the ducks who have gathered by the railing, I am confounded by how vividly I can see into my past. What did the end of summer mean to me now? How is different than from the days of my youth? It was 31 years ago since I last stood in front of a classroom and tried to make a difference in the lives of high school students. In the twilight of an approaching autumn I let my mind drift back to time and a place where my world centered around the school year. In my heart of hearts I will always be a teacher. Yet, for the past 30 Septembers I hadn’t give much thought, or harbored regret in terms of surrendering my teaching career at the age of 29. In the stillness of the moment I let myself go back. 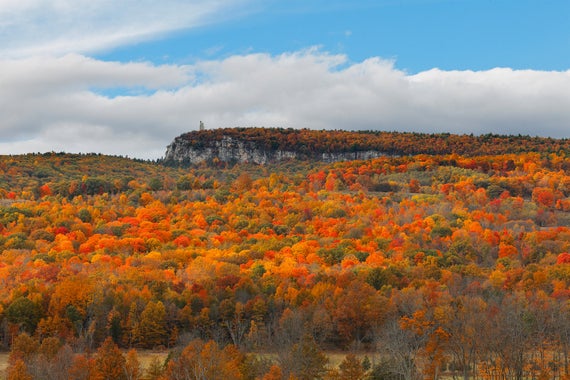 The drive from New Paltz along the Shawangunk Ridge is beautiful on an early September morning. My 1968 Ford Cadillac is taking me towards Pine Bush to start my first full day as a social studies teacher in the Circleville Middle School. Having been a poor student in high school and at best an average one in college could make someone confused about why the hell I wanted to be a teacher. Nonetheless, this is the career path I have chosen. In a few minutes I will be standing in front of my first global studies history class. As I avoided the deer along Albany Post Road I adjusted my radio to a group out of Easton Pa. called Cyrkle playing the tune “Red Rubber Ball’. “And I think it’s gonna be alright, yeah the worst is over now the mornin’ sun is shining like a red rubber ball.”  The song was blaring as I pulled into the school parking lot and the career that was ahead of me. I slowly emerged from my overside vehicle, adjusted my tie, and took a deep breath. It was showtime and it wouldn’t be long before I was feeling like a star.

I could feel the eyes of people who were only a few years younger whispering to their friends, “who is he?” I did my best to look straight ahead seeking refuge in a room that for the 1982-83 school year would be Mr.Siegel’s room. All these years later I can still see  the kids in that first period ninth grade Global Studies class sliding through the open classroom door (I still think I could name over 80% of em).  I was ready to put on my first official performance. For me it was magical, I was confident that this was my calling and I was ready to hold my first audience captive. That first class stared at me with a confused malaise, “he is really our teacher?” Earlier in the morning I had ran a razor across my peach fuzz face, put on a pink button down shirt, tan khaki pants, penny loafers, and a dark blue and white striped tie. It looked like I could have just come from the movie set of St. Elmos Fire. 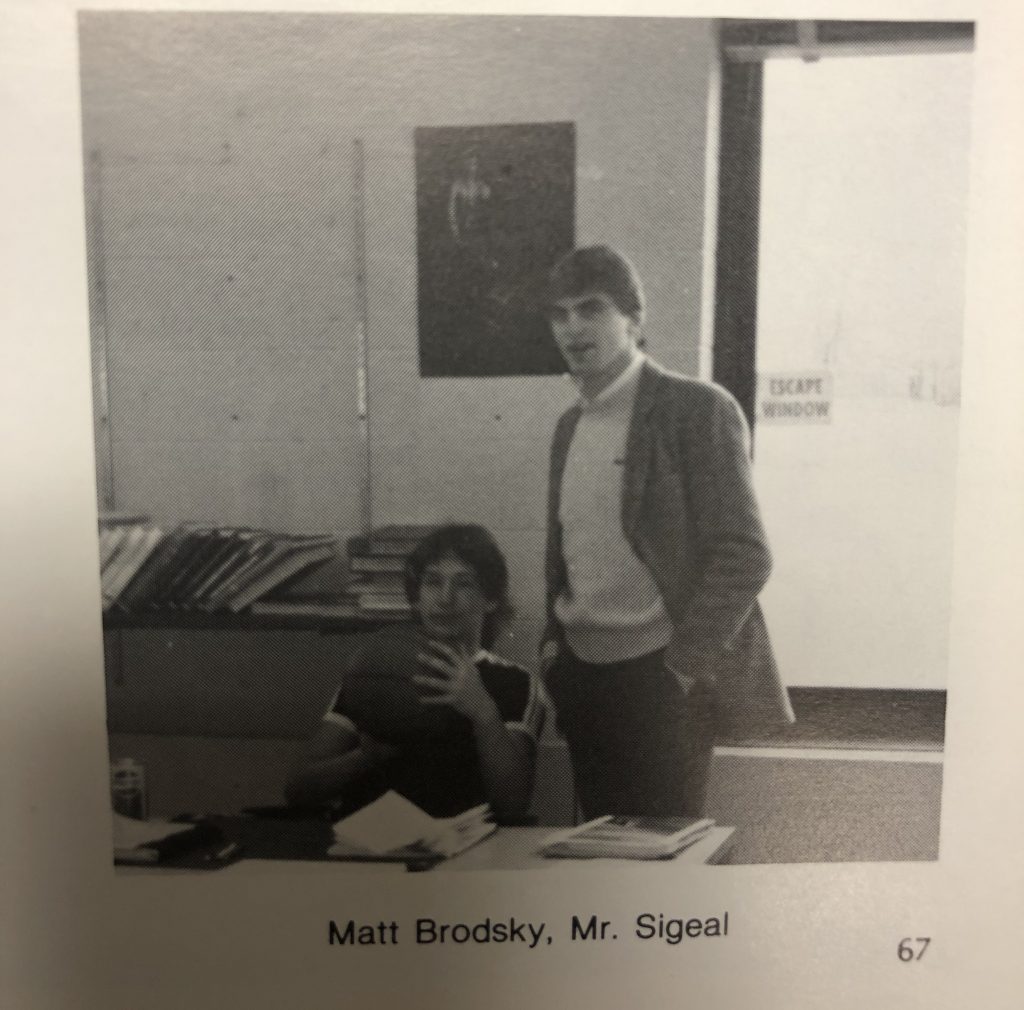 After the formal introduction of names and classroom etiquette I asked the students to write down what they expected out of this class and of me as their teacher. As a student I had always wanted to state my expectations I had for my education but I couldn’t imagine the type of answers I received from these 15 year olds I got that day back in 1982. “I expect to search for solutions of peace in the Middle East.” “I expect to get to know my teacher outside of the classroom?!” I had chosen to be a teacher and felt an obligation to deliver universal messages. As I stood in front of that first class I could feel the power. In the tiny little serfdom of Circleville Middle School in Pine Bush New York I was the rock star I always wanted to be.

At the age of 21 I had warped motivations in my desires to mentor teenagers. Teaching gave a contradicted young man a platform, a stage, and an influential voice. In many ways the profession played into both my strengths and my selfish weaknesses. I am an excellent public speaker, I can be charming and I am a true salesman, who on his worst day is manipulative and on his best influential. At the same time I was seeking adulation, popularity, authority, power, not to mention summer’s off. In he middle of that dichotomy was an insecure young man who enjoyed what he was doing and wanted to make a positive impact. Looking back there hasn’t been a time in my life since those early days of teach when my stride was longer or my voice clearer. I had a captive audience of impressionable youth in front of me for five shows a day. In a Wall Street sort of way I was a “Master of the Universe”. “Did you see what Mr. Siegel is wearing today?” “Did you hear what Mr.Siegel said to Matt Brodsky fourth period?” “Was Mr. Siegel flirting with Ms. Gove outside the teacher’s lounge?” For a delicate moment as the summer of my life was beginning I was living a dream.

After two years in the Middle School I was asked to go the call up to the high School to teach 11th and 12th grade American History. I recall telling my friends in the spring of 1984 that I had been called up to the majors. For a short period of time there was a fire burning inside of me that roared with passion and ambition. I had found my calling. This was what I had put on this earth to do. But not unlike a blissful love affair it didn’t take long before the flames began to smolder. It wasn’t long before the bells were shrieking in my ears telling me it was time for a class change. A colleague who couldn’t carry my gym bag was named a department head and telling me how I should teach my classes. The principal, who thought leadership meant presenting gold stars to hall monitors, called me into his office to review rules and regulations of faculty meetings. In very little time the free side of my spirit was screaming at me,” you cannot do this the rest of your life.” 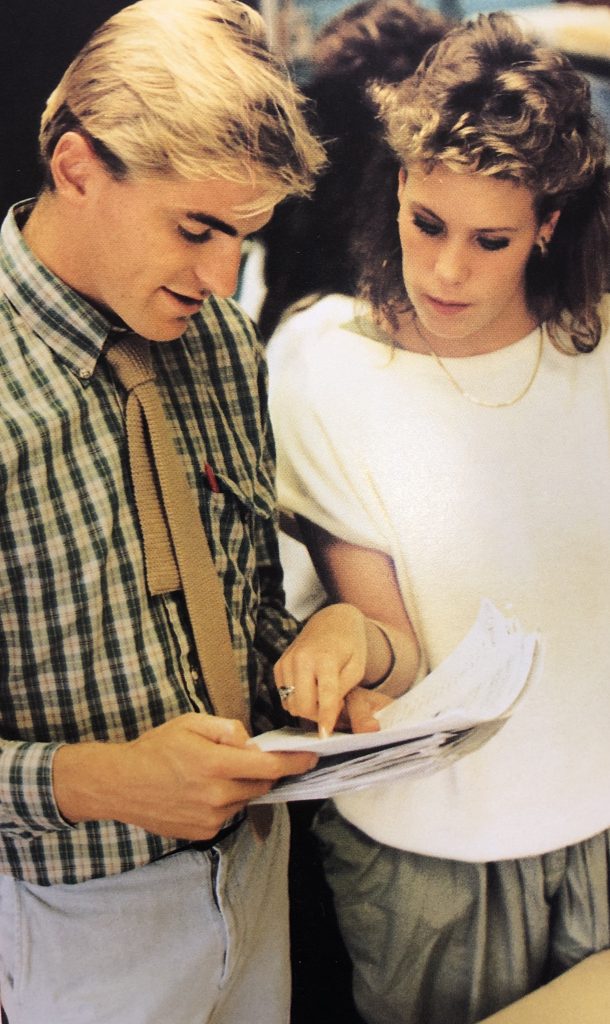 Only four years into my teaching career stagnation and rigamortis were eating away at my soul. The students that you invested yourself in move on. I felt left behind as they ran off to new and exciting adventures while I stayed behind to re-invest in the next class again and again. It took me seven years to understand that remaining stationary in a public school classroom would crush the wild child in me that lived so close to the surface. In June of 1989 I said good-bye to Mr. Siegel and didn’t look back. Now only the stories of that titilating time in my life remain for me to write about.

Many autumns have come and gone since my school days. I have moments where the gap of time seems like only yesterday. October is closing in and as I sit behind the school busses and brush the leaves off my car I find myself trying to connect the distance. Our school days and our childhood are so intense to us that the memories stay with us no matter how hard we try to sometimes repress them. People who eventually evolve into adults mostly find disappointment in their younger selves. Hopefully we find solace in the fact that we were young, we fell a lot, we learned how to get back up, and we made an effort to figure out who we wanted to become. As I say my goodbyes to another summer the answers are getting clearer. It is great to look back at the summer as the leaves are showing a hint of other colors in the late September twilight. The captains of summer are docking their crafts in front of me possibly for the last time until spring. I ask the barmaid to fetch another round as I take it all in. It’s Sunday evening, tomorrow is a school day and my thoughts go back to who I once was, who I wanted to be , and who maybe I will become again; a teacher.