I opened the back door to my office and stepped into the twilight of a world that , now more than ever, was uncertain of its’ future. New York State, earlier in the day, had officially shut down all non essential businesses and the Governor, Andrew Cuomo, was recommending that people quarantine themselves in their homes. As fate would have it I had planned a four day stay in Florida to get some Vitamin C and to recover from a long bout with the flu.  On a Monday, 5:30pm and my parking lot was barron with the exception of my ride. This new reality I was walking towards felt hauntingly still.  The night before I had made up my mind that a virus was not about to stop me from my meeting with a sun I hadn’t seen since August. Without hesitation I hopped in my already packed vehicle and headed for the open highway. How many people would be on this flight? Would the hotel even be opened  in Hollywood Florida? Would the pool and restaurants be opened? None of these questions caused me to lower my speed to the airport. After seeing maybe 20 other cars on the Thruway I arrived to a sparsely populated Stewart International Airport. The attendant checked my boarding pass before me the the 11 other passengers headed to the gate. I was uncertain how this potion of scarcity, distance, and quiet was going to mix in these totally different times we are now living in. The darker side of me felt like a road warrior heading out into the un-quarantined lands right before the end of days. 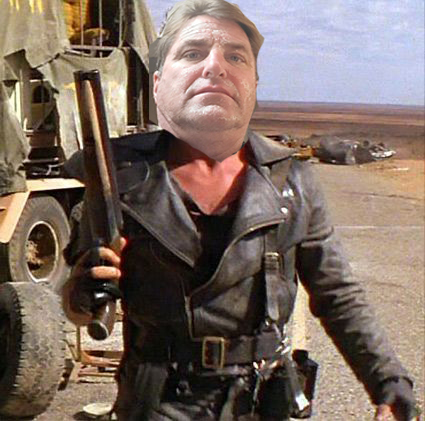 Stewart Airport in Newburgh is the smallest and least frequented terminal of any in my rotation of travels. On this particular March night it resembled a ghost town. ‘I guess this shit is real’ , I said under my breath making my way onto to Jet Blue flight 2882 to the twilight zone. It was evident the few people that were braving the storm were staying to themselves. There was an uneasiness that hovered in the air, ‘this is what life is going to look like, this is the new order,’ I was thinking. The coronavirus was in the beginning stages of bringing America to its knees. The word from our government was we should all stay at home, and only essential workers should report for duty. It was clear to me that our freedoms, our economic stability, and our livelihoods were in jeopardy. I stepped onto a plane filled with 12 tense and humorless travelers. I was determined to remain quiet and only speak if spoken to. It was apparent any attempts at humor or small talk would not be welcomed. “Did you hear the dow dropped 3,000 points today,” an older man whispered in my direction. I shook my head in feinted disgust and began the search for my own space. Two rows before I reach my seat a young lady barked across the aisle to the man in the adjoining aisle seat. “Stop trying to have a conversation with me, I am not interested in talking to you.” I settled into an isolated row near the back and was set to let the message come to me.

I settled in near the tail of the airliner and kicked back into full recline mode. I turned to my left and looked out to the dark sky and into the future. ‘What will things look like the next couple of weeks and how long will the recovery be?’ That seemed like a good place to start imagining what would be the most efficient way to handle this new set of circumstances. The landscape below was no longer just a sleepy Hudson Valley on a March Monday, it was now what I describe as the un-quarantined zone. Of course this virus, and all that goes along with it, is a major inconvenience and will suck every last drop of patience out of me. But still, I was searching for an adventure, a story, a story within the story. I was a traveler now, in the time of the coming apocalypse. ‘What if this is the end of days? Why was I moving away from my family in a time of crisis? Maybe I’ll be forced to stay in Florida for an extended period of time? I could be like Mel Gibson in the movie ‘Road Warrior’, surviving in a world where the weak perish.’ The higher we got in the air the more my imagination ran free. This was an adventure alright, and being on a plane and headed out into the un-quarantined land was a certain kind of naughty. And God knows I love a good opportunity to feel nice and naughty. 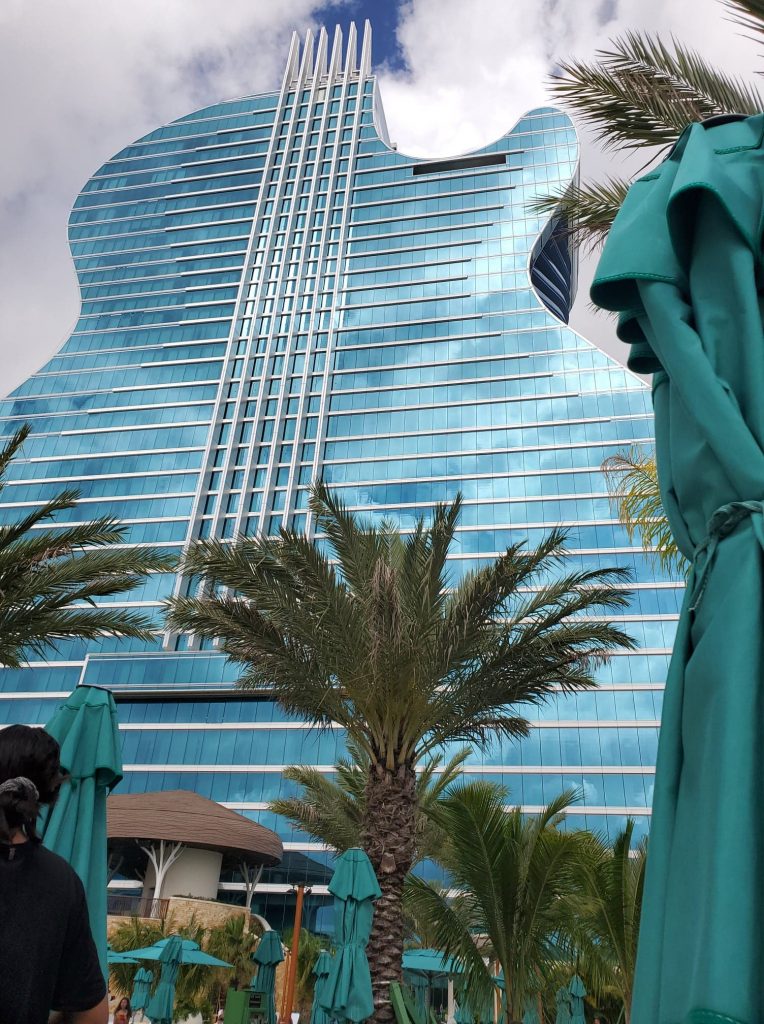 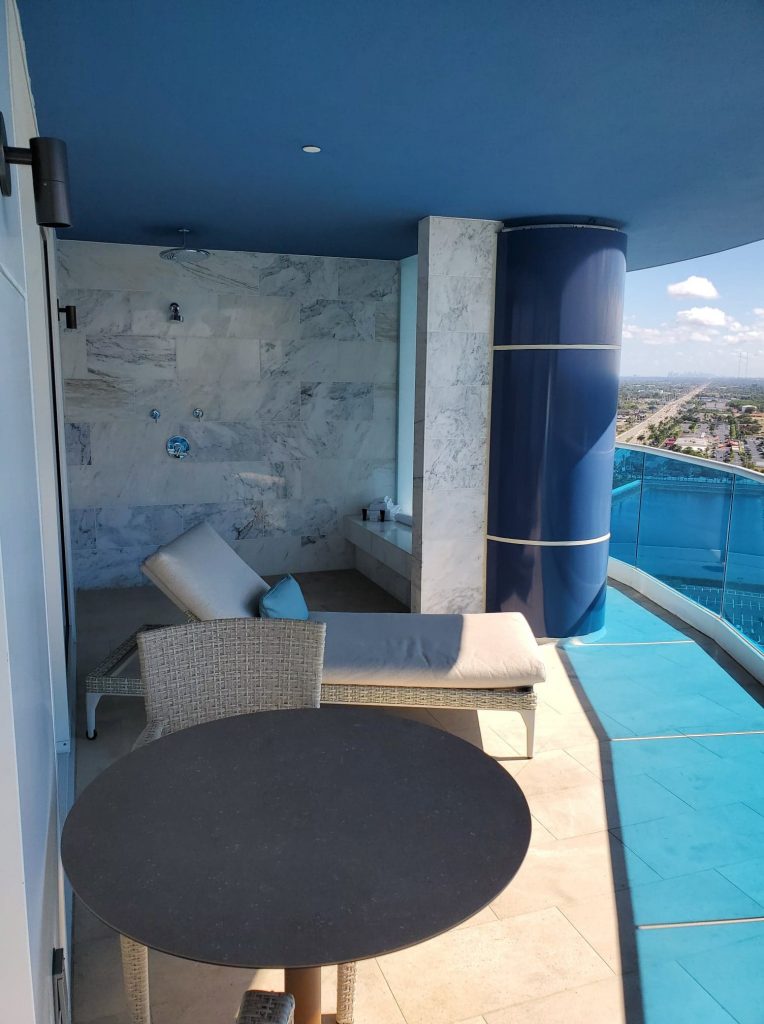 The Seminole Hard Rock Café and Casino in Hollywood Florida was at 15% of its capacity when I checked in on Tuesday morning. ‘Who was staying,’ I wondered as I negotiated an upgraded room and another night’s stay. It must be people like me who have had a trip planned for a long  time and refused to let a virus cancel their vacation. And the rest had to be sick gamblers seizing  the chance to have the entire casino to themselves. It didn’t take me long to figure out the next morning that people were on edge and were not interested at all in socializing. I headed to the pool seeking to reconnect with a sun that had left me alone since August. There might have been 75 people hanging by a fantastic pool setting that could accommodate probably 600 guests. I was sticking to my plan of surviving the apocalypse working on my tan all by myself. Though, I was not entirely disappointed when a mother and her college age daughter pulled up a lounge chair right next to mine. They were escaping Connecticut with a similar plan as me. I didn’t know it then but this was going to be the most interaction I was going to have with any body for the next three days. I listened closely as these two Connecticut yankees expounded on what a great job Trump was doing and that this pandemic we were experiencing was extremely over hyped. I overstayed my welcome on my first day poolside. By night fall I was bright lobster red. The rest of the trip was occupied with sun burn pain and isolation. 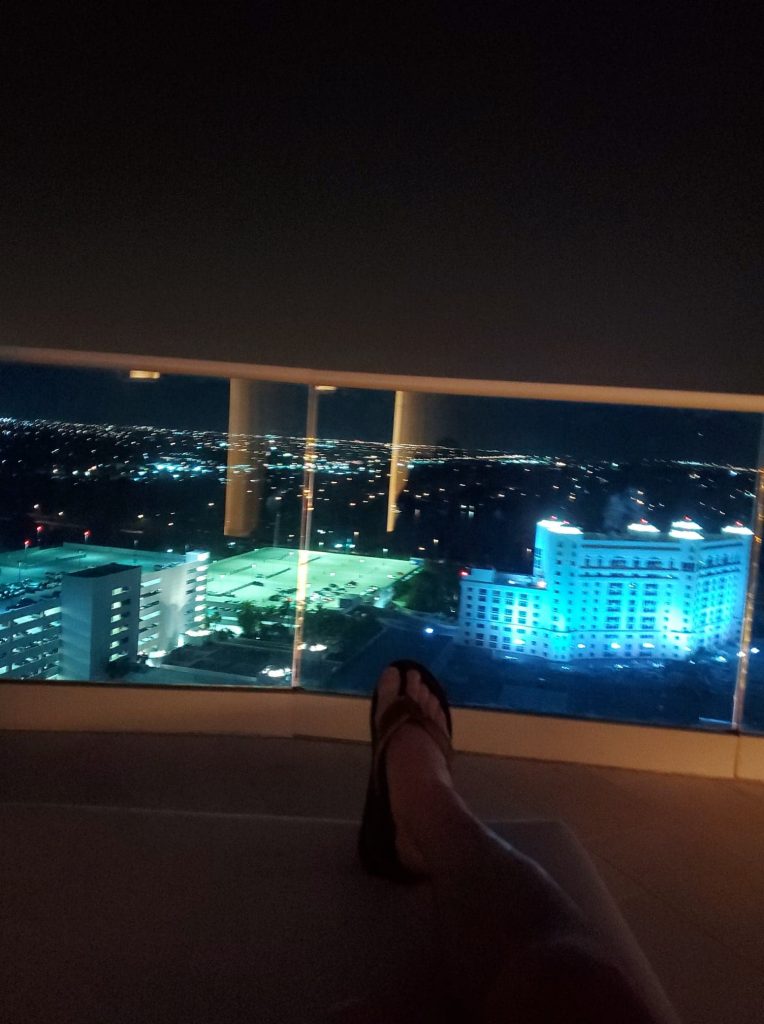 Despite being burnt to a crisp I was able to find way down from my 24th floor refuge each night to enjoy a cocktail and dinner. The many bars and restaurants inside the Hard Rock were open for business but there was a shortage of patrons. Seats at the bar had to be separated by three stools so any chance to engage people was limited. I strolled through the Casino floor only to find at least twice the amount of employees as there were gamblers. Down by the poker room was the only semblance I witnessed that things were still the same. Two men, who probably wouldn’t know the difference between the coronavirus and the chicken pox, sauntered out of the poker room recapping the last hand. “I see the two hearts, but there is no way he can call 135 dollars hoping to catch the flush,” said the man to his friend who continued to stare straight ahead contemplating his own problems. In the height of a pandemic these two card players were going about their business as if it was just another day. When hustling cards is your racket a simple global pandemic is not going to stand in your way. On my walk back to my room I stopped at the closest watering hole. For the first time in three days I could sense the resentment from the barmaid. If I could have read her mind I think she was saying, “what are these idiots doing out, possibly contaminating others, and potentially exposing me to this virus?” I was reading between the lines of her actual words: “Do you realize we may be the only bar opened in Florida?” ‘Oh really, please give my drink to go,’ I replied meekly. 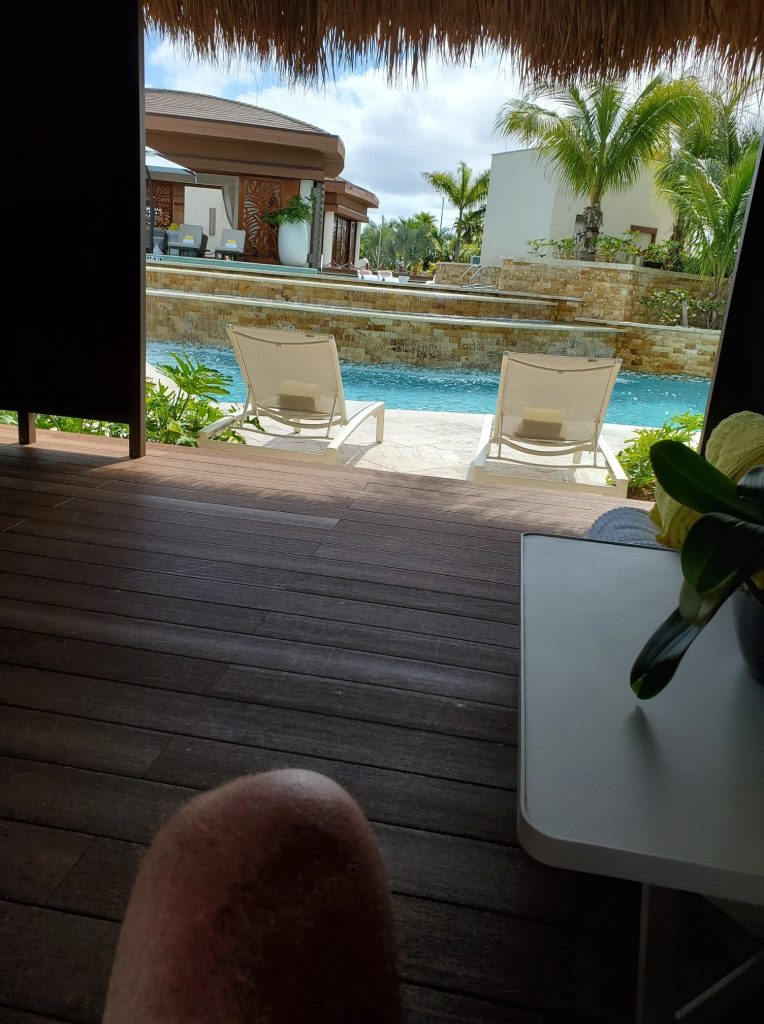 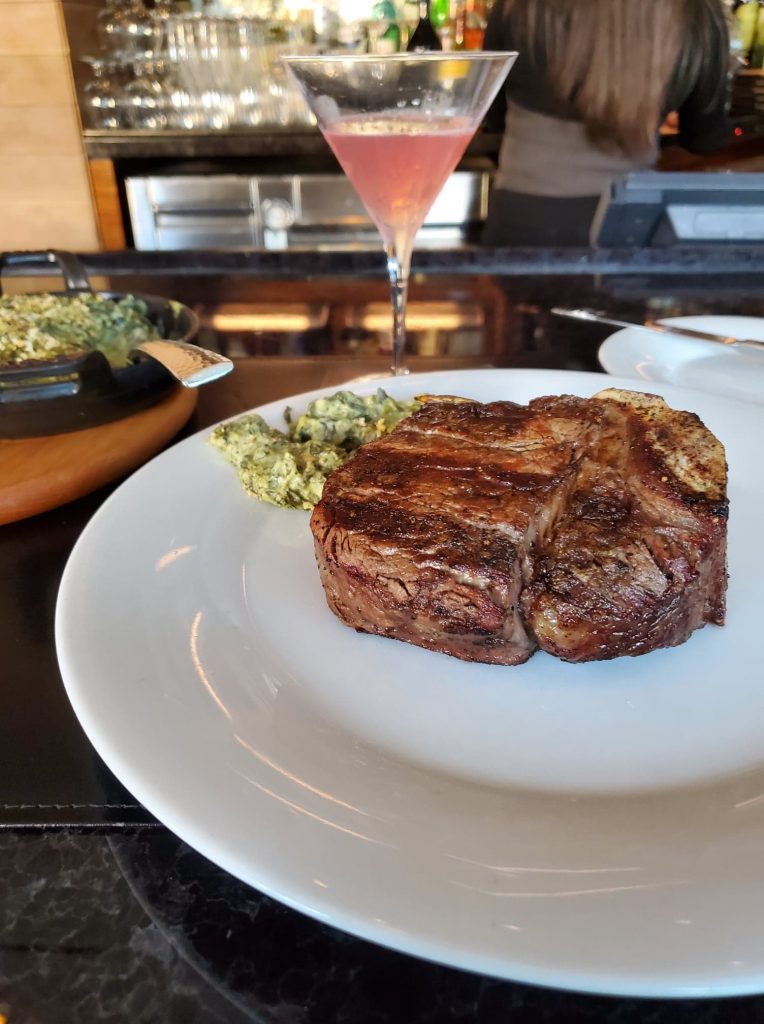 By Friday it was time to leave the southern un-quarantined territory and fly back to my new reality. Speeding down I-595 east the confusion I experienced on the beginning of the trip was once again rearing its’ head. I was happy to be leaving Florida but what was I headed for in New York? “But my dreams they aren’t as empty as my conscience seems to be,” the ‘Who’ (Not The World Health Organization)  was bringing me to the airport with their provocative song ‘Behind Blue Eyes.’

Myself and seven other road warriors walked down the gate to board a Jet Blue Airliner bound for the big apple. I have a custom of being the last person to board the the aircraft. Standing at the cabin door the lone stewardess and one of the pilots were greeting the eight passengers to the flight. I attempted to look away but I could tell the two Jet Blue employees were staring at me. After I situated myself alone in the back of the plane, I noticed the pilot had followed me. “Excuse me sir, but it is necessary for us to take every precaution in the these uncertain times. I notice your skin is showing the signs of illness, I’d  like to have you checked out before take off.” 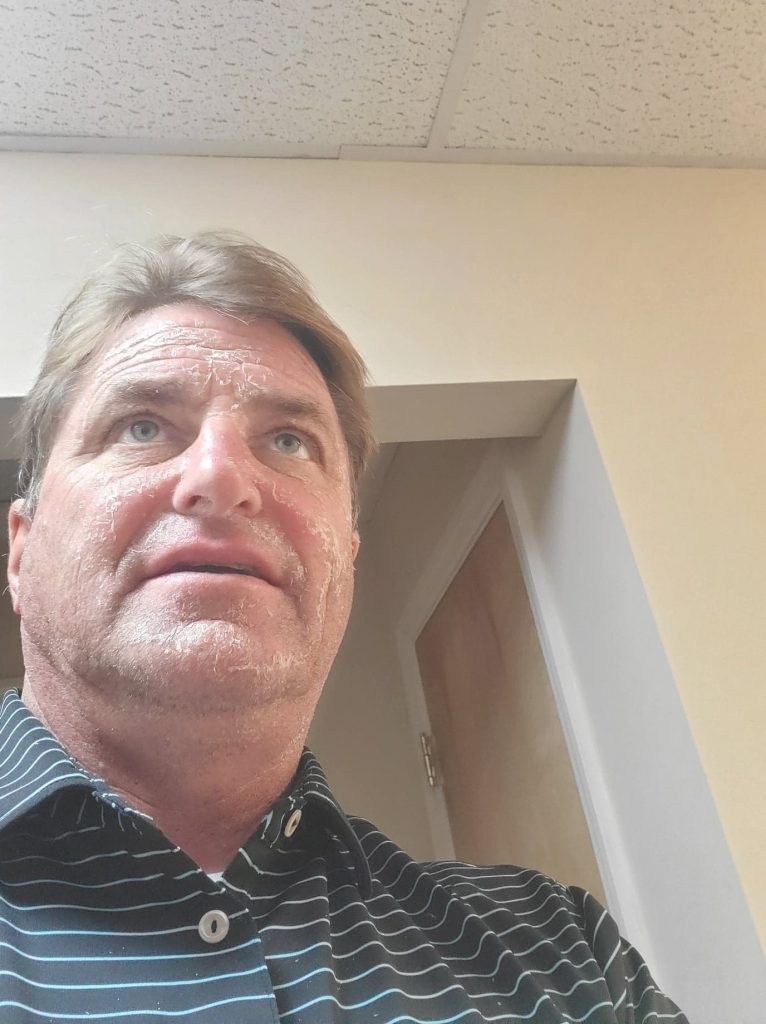 “It’s only sunburn,” I urged. “Oh that makes sense”, the pilot nodded and turned to the the head of the plane. We were in the air and I could see the deserted Fort Lauderdale beach below me. Yes, it was a beautiful day, yes it was the midst of the traditional college spring break. But the world is a different place now and I was headed home to reclaim my place in it.