A while back I was in Houston working with a group of professionals who wanted to improve their presentation and speaking skills. I was able to interview each of the attendees via phone prior to the event and was especially impressed with one young woman who explained that she was new in the company and was looking forward to developing her career. As she put it, she knew she was the “low girl on the totem pole” so to speak, but that was fine with her. The more we talked, the more I knew that she was focused on her success. In fact, her words were so bold I wrote them down. She said she asks colleagues questions like, “What do you need help with? Let me help you.” Or “Where are you going? Let me go too!” In summary, she used these words, “I don’t want to be replaceable!”

“Wow,” I thought to myself. That is someone who is going to achieve her professional goals. Someday I expect she will be the President of a very successful company.

As her words noodled around in my brain, I was caused to think about a recent experience and learning opportunity. I visited one of my college friends, Greg, and his wife, Linda, at their home on the Gulf Coast. Greg grew up in Bay St. Louis, Mississippi and is a bona fide Cajun. That means he talks funny and puts hot sauce on everything. They invited some of the college gang down to fix a big ole pot of Gumbo. And when I say, “big,” I mean really big.

On Friday, Greg gathered all the ingredients, prepared the outdoor propane burner, and when nobody was looking made the roux. Because we weren’t putting the concoction together until Saturday, we went out for dinner that night at a local restaurant named “Goat Feathers.”

For the life of me, I couldn’t figure out what goat feathers were. The term was so new to me that I mistakenly referred to the restaurant as the Feathered Goat. My friends of 40 plus years laughingly corrected me as I entered the establishment with a curious mind about the curious name.

While at the restaurant, I discovered that the term was coined by Ellis Parker Butler in 1918. The definition was screened on a t-shirt and read, “Goat-feathers are the distractions, sidelines and deflections that take a man’s attention from his own business and keep him from getting ahead.” I immediately decided that the term applied to women too.

The following day we made 15 gallons of gumbo and reminisced around the kitchen table. I headed back to Georgia and on to Texas, missing out on all the excitement of snow!

While on my trip I pondered the goat-feather quote and did a little research on this Butler guy. Imagine my surprise when I discovered he was a writer – penning columns and article for publications at the turn of the century as well as writing a humorous classic, “Pigs Is Pigs.”

In an article written in 1918, Butler lamented that he should have been a world famous author, joining the likes of his contemporaries Mark Twain or S. Scott Fitzgerald. He went on to say that the problem was that his life was filled with collecting goat-feathers. In other words, he was easily distracted from being a successful writer by other tasks like cleaning the letters “a” and “o” on his typewriter with a toothpick, serving on boards or assisting in fund-raisers.

I chuckled as I read the article, recognizing my own side-track tendencies. My penchant for gathering goat-feathers is a deflection that takes my attention from my own business and keeps me from getting ahead. At least ahead in the more traditional business definition of the word.

Instead of finishing the manuscript for a new book, I’ll get side-tracked by thumbing through old family photos. Instead of working on a desperately out-of-date web site, I will meet a friend for breakfast. Instead of writing a few columns ahead of time, I’ll jump at the chance to keep little Peyton Leigh for the afternoon. The goat-feathers are just too, too tempting.

I envy the people who seem to have been inoculated from the need to collect goat-feathers. I wonder if they took an anti-virus for that.

Such seems to be the case of my new young friend. I had a chance to talk and work with her for a couple days this week. I am convinced she is going to achieve her business goals. She’s not going to stumble over goat-feathers and probably won’t even notice them vying for her attention. She’s headed down the path to success with a clear focus on her goals and future.

I, on the other hand, will take a 6 hour trip to make gumbo, reminisce with old friends, and eat a meal at a crazy place called Goat-feathers. Maybe collecting a few goat feathers is not such a bad thing! 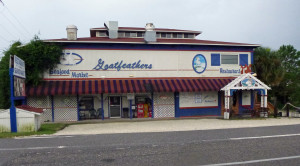